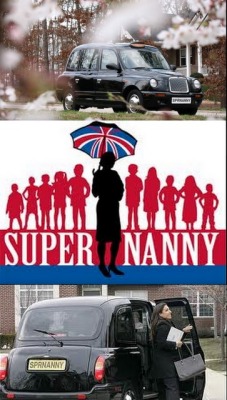 Acquired from the ABC TV show 'Supernanny', this was Jo Frost's featured transportation for 7 years, as she traversed America. The Taxi was custom built in 2003 for the show as general import is not allowed. To meet American emissions standards it was especially kitted out with a Ford 4 cyl. Diesel. An Intercom ststem, Leather seats and twin A/C's are also part of the features. The same company LTI (London Taxi International) has been building these since 1938 - with very little body design changes in 70 years...

Audrey is a terrific member of the White Horse Crew

Please give her a wave as she rolls around the area - She really likes that.

‘Supernanny’ taxi on the way 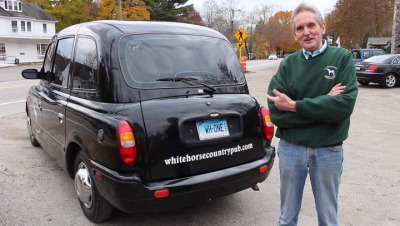 John Harris, owner of the White Horse Country Pub & Restaurant in New Preston, Conn., has a 2003 LTI TXII as a company car. The London taxi model was used for years by Jo Frost on the TV series "Supernanny" before landing in northwestern Connecticut in 2011.

Her name is Audrey. Her current owner applied that name after rescuing her from a vagabond life. “It’s got character,” said John Harris of the 2003 LTI, a TXII model that’s always on display at his White Horse Country Pub & Restaurant in New Preston. “It needed a name and Audrey is just a nice old English lady’s name.”

If Audrey could talk, she’d likely have some tales to tell from spending six years transporting “Supernanny” Jo Frost around the country on her TV series that began in 2005. Harris acquired the taxi after the show folded and has swapped the car’s “SPRNANNY” rear license plate for a Connecticut marker that reads “WH ONE.” READ MORE

The White Horse Pub in Washington Acquires Taxi from Supernanny 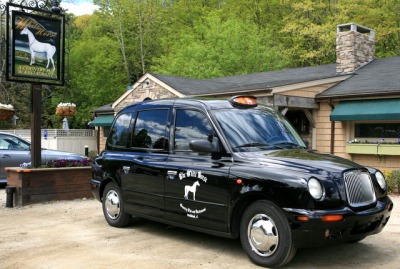 WASHINGTON- The White Horse Country Pub and Restaurant has introduced its newest member of the team - 'Audrey.'

This is the custom built London Taxi featured for the last six years on the hit national TV show 'Supernanny.'

'Audrey' established quite a following for herself, traveling around the country with Jo Frost, the shows star, in the back, the show has now completed production and moved back to London; meanwhile the White Horse was on the lookout for an appropriate company vehicle, so it was a natural fit.

The taxi was custom built with left hand drive, all leather seats, 2A/C's, and an intercom system.

As the new White Horse company vehicle, its evolving usage is envisioned to include picnic drives around Lake Waramaug and round tip pick-ups to the restaurant from local hotels, as well as customers' homes.

It will be used for company outings, a shuttle service if ever additional parking is required, and all off-site catering parties. Plus of course it is just good fun to have and drive around in.

Star Stays On The Go But Ride Finds Home

THE REPUBLICAN AMERICAN May 16th 2011
by George Krimsky

Anyone familiar with the TV series "Supernanny" might be surprised to see one of its stars outside the White Horse Country Pub and Restaurant in the Marbledale section of Washington Conn., these days.
Not Jo Frost, the English nanny who played herself on the popular ABC reality show, but her car - the London taxi dubbed 'Audrey.'
White Horse owner John Harris, a British native himself, recently bought the distinctive black taxi that was made famous carrying Frost around the country advising parents how to deal with their children.

"I was looking for a company car," Harris said, "and heard this one was available after the show moved back to London. I got it for a decent price," he said, declining to disclose what he paid for it.

The diesel-powered car, with right-hand drive and all-leather seats, retailed for $60,000 when it was new in 2003. London taxi cabs cannot be exported to the United States, because of emission requirements, but the car from the show was custom-fit for the U.S. with a Ford engine, Harris said.

He said the pub plans to use "Audrey" for pickups, deliveries and tours. The license used to read "SPRNANNY." Now it will read "WH-1." The White Horse opened two years ago this June, replacing the Marbledale Pub on Route 202 in the section of Washington bordering New Milford.

The White Horse Country Pub and Restaurant recently introduced the newest member of its team. "Audrey" is a custom built taxi from London, England. Featured for the last six years on the hit national TV show "Supernanny." Audrey established quite a following for herself, traveling around the country with Jo Frost, the show's star. The show has closed production, but the White Horse stepped right in to fill its need for an appropriate company vehicle, explained White Horse owner John Harris, a British native. "It was a natural fit, custom built, with left-hand drive, all leather seats, two A/Cs and an intercom system," he quipped.

The new White Horse company vehicle is envisioned, Harris said, to provide picnic drives around Lake Waramaug, round-trip pickups to the restaurant from local hotels, as well as customers' homes, company outings, a shuttle service if ever additional parking were to be required and off-site catering parties. "Plus, of course," he smiled, "it is just good fun to have and drive around in."