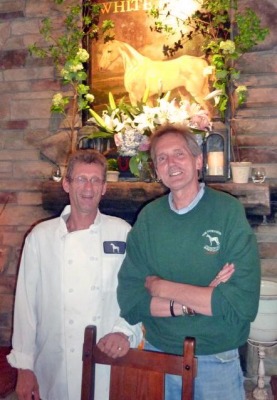 ‘Movie Stars’ Join Celebration at the White Horse Country Pub by Linda Zukauskas Published: Wednesday, August 10, 2011 7:13 AM EDT Chef Fabrice Denis (left) and owner John Harris take a rare moment to rest below an antique sign that bears the same name as the Marbledale restaurant, The White Horse, 258 New Milford Tpke. They work hard alongside a friendly staff to offer fine dining in a beautiful setting, priced to welcome everyone. (Zukauskas photo) To order reprints, visit www.ctvoices.com/voicesphotos. MARBLEDALE — John and Lisa Harris celebrated their second anniversary as owners of The White Horse Country Pub, 258 New Milford Tpke., New Preston (Marbledale), by holding a birthday party this past June. “We had a lot of fun,” Mr. Harris told Voices, noting the restaurant welcomed two very unusual “movie stars” to the party: horses that had appeared in films such as “Secretariat,” “Hidalgo” and the remake of “Arthur.” Mr. and Mrs. Harris had chosen the image of a white horse for their venture in the countryside because it seemed a good fit for the location and the times. “In difficult economic times such as these, a white horse appears on top of a hill and it’s a symbol of hope,” Mr. Harris explained to Voices. A pub sign from The White Horse in Mayfair, England, circa 1840, went on auction just two weeks after they settled on a name and now hangs above the stone fireplace to confirm their choice. In front of that is a tavern table made in 1560, which came from a royal castle in Kent. “There were good conversations around that table,” Mr. Harris mused, expressing his desire to make more conversations possible.

The White Horse has a loyal customer base, some of whom dine there every day. “That’s what a pub is. We genuinely want people to feel at home here.” He added, “We hold training sessions twice a week, always asking ourselves, ‘What can we do better?’ “We’re passionate about this,” Mr. Harris said; many customers ask if the couple will open another location but he is adamant: “There’s no temptation. Do one place, do it right, and focus on it.” Embellishments on the dishes such as a small pastry horse on top of a chicken pie or the same image dusted in cocoa power on a dessert plate hint at the skill with which the food is prepared by five-star chef Fabrice Denis and his staff of nine. “We’re constantly tweaking the menu,” Mr. Harris said. He and his wife recently examined the dinner menu but found it impossible to remove any one item because they’re all popular. The seafood is fresh and hamburgers are made from a special blend of ground meats including brisket and short rib. “It’s sparked a trend that other restaurants have copied,” Mrs. Harris remarked.

Mr. Harris announced he’s contracted with a local farmer who has dedicated a parcel of land to produce organic vegetables exclusively for the restaurant. “We try to purchase locally.” The bar features seven beers on tap and 25 bottled beers, including favorite English beers such as Old Speckled Hen, Bass and Guinness. “It’s important to offer five-star cuisine at an incredible value. We wanted to make it inclusive for everyone.” Mrs. Harris noted that no one pays extra for the view to enjoy classic dishes that would be priced at double the amount elsewhere. Just as customers tend to become regulars, most of the staff has been with The White Horse since it opened. “They feel much a part of the success of the business. We do staff outings to build team spirit, like skydiving and cruises up the Hudson River. “There’s a great relationship between the front and back of the house. No one wants to disappoint a customer and let the whole team down. We hire people that really care.” Mrs. Harris’ favorite aspect of the restaurant is, “the creation of it. Lots of pubs in England are austere. The vision here is a pub you would see in film, an idealized version with flowers, historical objects and ambiance.” Razing the structure that originally sat on the site gave the Harrises the opportunity to create exactly the space they envisioned: comfortable and welcoming, offering more than large windows onto the picturesque Aspetuck River, but making nature a part of the restaurant.

The floral covered patio spaces have witnessed proposals, weddings and “smooching,” according to Mr. Harris. Mrs. Harris said that special decorative items in the restaurant, such as royal papers and an antique chest must have a pedigree before entering the building. For example, the couple recently acquired “Audrey,” the London taxicab used on the television show “Supernanny.” Soon the staff will use Audrey to deliver food for catered events to customers’ homes. “Normally, you wouldn’t have access to these things,” he said, pointing to the royal wax seal of Queen Elizabeth I. “It’s not your father’s pub. We’re affordable elegance.”

The White Horse is open seven days a week from 11 a.m. to 10 p.m. Customers can peek at the menu or read more about the antiques at www.whitehorsecountrypub.com. “There are so many aspects to a successful restaurant,” Mr. Harris said. “It’s atmosphere, food, staff, service; it’s everything, not one thing. There has to be attention to detail and we over think everything. We can never do enough. “It’s gratifying to work this hard and see it thrive. People love it.” Copyright © 2011 - Voices the Newspaper